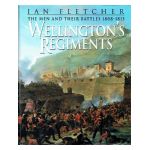 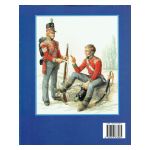 Gebonden / 188 bladzijden / uitgave 2005
taal (talen) : engels
uitgever : Spellmount
ISBN : 1873376065
EAN : 9781873376065
afmetingen : 282 (h) x 230 (b) x 23 (dk) mm
gewicht : 1195 gram
BESCHIKBAAR
Alle prijzen zijn BTW inbegrepen
'The most complete machine for its numbers now existing in Europe' was how Wellington described his army in November 1813, shortly after the Battle of the Nivelle which took him to the brink of victory in the Peninsular War. His army was indeed a superb fighting machine which blazed a trail of glory across the Iberian Peninsula from Portugal to Southern France, fighting a score of major battles and storming three powerfully held fortresses.

Wellington's Regiments is an account of that army and of each of the actions that were later awarded as battle honours, from the early days of the Peninsular War, at Roli<;a in 1808, until the final momentous battle at Waterloo some seven years later.

Also included are the service records of every single infantry and cavalry regiment that served under Wellington between 1808 and 1815, thus providing a unique fighting record of one of the finest - if not the finest - British Army ever to fight on foreign soil. Lavishly illustrated, Wellington's Regiments is a tribute to that army, the one with which Wellington later said he could go anywhere and do anything.